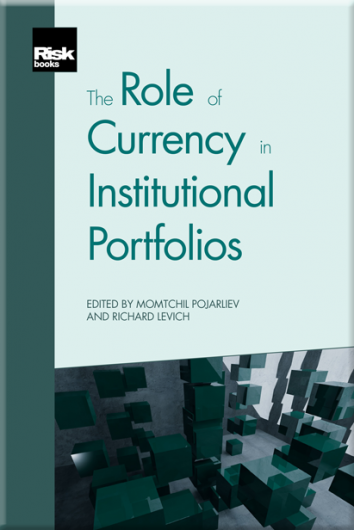 The Role of Currency in Institutional Portfolios

In the current financial environment in which institutional investors are failing to achieve their goal of superior returns or beating the market, investors are rethinking asset allocation as a whole.

The potential role for currency in institutional portfolios has been much discussed, yet overlooked. Finally this market segment is coming to the foreground of the investment landscape. Editors and experts in the area of currency research, Momtchil Pojarliev (Fischer Francis Trees & Watts) and Richard Levich (New York University Stern School of Business), present contributions from authorities in the FX sphere of the investment world as well as the more traditional sectors, providing a balanced perspective to institutional portfolios.

The Role of Currency in Institutional Portfolios offers a comprehensive description of currency investing and will re-evaluate the potential role of currencies in institutional portfolios.

The empirical evidence suggests that institutional investors are persistently failing to achieve their goal of superior returns or “beating the market”. This book focuses on currencies, an overlooked market segment, and investigates the question of how currency investing could be part of the solution of achieving the required investment returns.

From passive currency management to currency overlay, the importance of currency management in different asset classes, and a comprehensive and sophisticated account of benchmarking currency strategies, The Role of Currency in Institutional Portfolios is a must-read for institutional investors, asset managers and hedge funds, investment banks and academics alike.

Momtchil is a Senior Portfolio Manager on the Currencies team at FFTW where he focuses on generating alpha for portfolios as well as contributing to the investment process, both in the judgment and quantitative styles.  Momtchil also contributes to the growth and development of FFTW’s currency alpha strategy as a stand-alone product. He joined FFTW in 2013 and is based in New York.
Prior to joining FFTW, Momtchil was a director and senior portfolio manager at Hathersage Capital Management. Before that he was head of currencies for Hermes Fund Managers. Prior to Hermes he was a senior FX portfolio manager at Pictet Asset Management. Momtchil began his investment career at Invesco Asset Management, first as a senior economist and then as a senior FX portfolio manager.  He has 14 years of investment experience.

Momtchil has advised various asset management firms, including PIMCO and Goldman Sachs Asset Management, in the area of currency return analytics. He has published extensively in finance and investment journals. Most recently, Momtchil has co-authored the book A New Look at Currency Investing, published by the Research Foundation of CFA Institute. He is a member of The Economic Club of New York and the Swiss Society for Financial Market Research. He currently serves on the Editorial Board of the Financial Analysts Journal.

Momtchil holds an MSc in finance from Vienna University of Economics and Business Administration (1998) and a PhD in financial econometrics from University of Basel (2001).  He is a current CFA charterholder.

Richard is Professor of Finance and International Business and Deputy Chair of the Department of Finance at New York University's Leonard N. Stern School of Business. He is also a Research Associate with the National Bureau of Economic Research in Cambridge, Massachusetts and a founding editor of the Journal of International Financial Management and Accounting.

Professor Levich has been a visiting faculty member at many distinguished universities in the United States and abroad including Yale University, the University of Chicago, Ecole des Hautes Etudes Commerciales (HEC) in France, the Australian Graduate School of Management of the University of New South Wales, and City University Business School (Cass) in London. He has published more than 75 articles on various topics dealing with international finance, and is the author or editor of sixteen books. His most recent book is A New Look at Currency Investing (with Momtchil Pojarliev) published in 2012 by the Research Foundation of the CFA Institute.

Professor Levich received his Ph.D. from the University of Chicago.

Chapter 15: Due Diligence as a Source of Alpha
Chris Schelling (Kentucky Retirement Systems)

Part 4 - Global Markets and the Future of Currency Investing