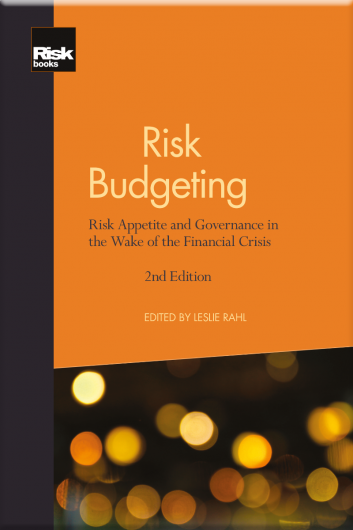 This fully updated and revised second edition of the best-selling guide Risk Budgeting expands upon the first edition, continuing to provide a road map for more effective risk allocation and better return per unit of risk taken.  This edition reflects in particular the growing focus on risk appetite and governance in the risk budgeting environment.

The second edition of Risk Budgeting expands upon its original themes to encompass risk appetite and risk governance, the importance and visibility of which have increased exponentially in the wake of the financial crisis.

While risk budgeting was just emerging as a best practice for pension funds and asset managers when the first edition was published in 2000, there have been many developments since, the prime example being the 2007/8 financial crisis, which cast a shadow over the quantitative techniques and tools used to mitigate and budget for risk up until that point. As Leslie Rahl herself says in the book’s “Introduction”, the years subsequent to the crisis (which also saw the collapse of Bear Stearns, the bankruptcy of Lehman Brothers, and the federal takeover of Fannie Mae) fundamentally changed the landscape of risk management to such a degree that the original methods of approaching risk have become obsolete.

This altered financial environment has made the industry much more conscious of the need to embed risk allocation into their traditional strategic planning processes. New regulations such as Basel III were introduced, representing a new approach to risk (particularly attitudes towards VaR and liquidity measures). A new examination of the topics discussed in the first edition of Risk Budgeting is clearly due.

Risk Budgeting, the second edition, is a fully updated accessible guide which includes new chapters such as:

This timely second edition is necessary reading for all practitioners, from CEOs, CROs and CIOs to portfolio managers, regulators and risk professionals across a variety of industries such as pension funds, hedge funds, insurance companies and banks.

Ms. Rahl is the founder and Managing Partner of Capital Market Risk Advisors (CMRA), a pre-eminent risk management and risk governance boutique.  As true "experts" whose practice is balanced between clients who are trying to avoid/solve problems and those who are litigating/investigating problems, CMRA is uniquely positioned to provide both pro-active and re-active services and has serviced hundreds of clients on six continents over two decades.

Ms. Rahl was a pioneer in the development of the swaps, caps and derivatives business which she co-headed at Citibank in the 1980s.  She served as a Director of ISDA for five years.  She is a member of the CIBC Board and Risk Committee.  Ms. Rahl is the author of two previous books and numerous articles on risk.  After a 19-year career at Citibank, Ms. Rahl formed and has run CMRA for over 20 years.  She has an MBA from the Sloan School at MIT and an SB from MIT.

Chapter 6
Pension Funds and Incentive Compensation: A Story Based on the Ontario Teachers’ Experience
Barbara Zvan