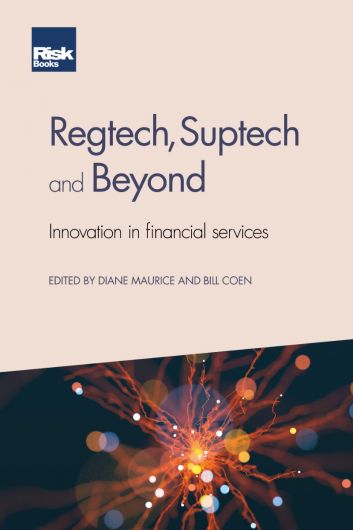 Regtech, Suptech and Beyond: Innovation in Financial Services

By Bill Coen and Diane Maurice

Regtech, Suptech and Beyond is the latest release from the Risk Books library. Divided into 5 parts, the book explores in detail the emerging best practices in regulatory oversight which leverage technological solutions. Folding in new research and analysis, it serves as both a reference and a working manual; providing a frame of reference for regulatory developments and the important role of technology. Readers from central banks, regulators and firms pursuing technological solutions to regulatory and supervisory oversight will benefit from this handbook.

Technology and innovation continue to have a dramatic influence on financial services and products as well as the markets in which these are offered. Similarly, technology and innovation in regulatory and supervisory oversight are rapidly evolving. Covid-19 and the global crisis surrounding the pandemic has accelerated this evolution further still, putting regtech and suptech centre stage for both regulators and those they regulate.

In the first compendium of its type, editors Bill Coen (former Secretary General of the Basel Committee on Banking Supervision) and D. R. Maurice (former Federal Reserve analyst) and have gathered together chapter authors who are deeply involved in the development of this essential financial-services oversight function. Authors spanning the public sector, including supervisory authorities and central banks, academia, and the private sector provide the reader with unique and dynamic views of both the current and future regtech and suptech ecosystem.

Divided into 5 parts the book explores in detail the emerging best practices in regulatory oversight and financial services which leverage technological solutions. Folding in new research and analysis, Regtech, Suptech and Beyond serves as both a reference and a working manual; providing a frame of reference for regulatory developments and the important role of technology. Readers from central banks, regulators and firms pursuing technological solutions to regulatory and supervisory oversight will benefit.

The strengths and challenges of leading methodologies and techniques explored in this book will provide practical and actionable solutions. As a result, readers will gain a deeper understanding of the business implications of the use of technology in meeting their daily regulatory and non-regulatory activities.

The table of contents ranges from regulatory sandboxes, cloud strategies and central bank digital currencies to anti money laundering, AI, machine learning and “big data”. A “how to” in the execution of compliance, monitoring, privacy, and cybersecurity spanning the globe Regtech, Suptech and Beyond, should be on the desks of practitioners, regulators, consulting firms, academics, students and fintech innovators and entrepreneurs.

Bill Coen served as Secretary General of the Basel Committee on Banking Supervision from 2014 to 2019, where directed their work and managed its Secretariat. He also chaired the Committee’s Policy Development Group, which developed and recommended the Basel III post-crisis reforms for endorsement by the Basel Committee and its governing body, as well as chairing the Committee’s Task Force on Corporate Governance and the Coherence and Calibration Task Force. Bill was previously Deputy Secretary General, responsible for the Committee’s response to the GFC, including coordinating the various Basel III policy initiatives.

He joined the Basel Committee’s Secretariat in 1999 from the Board of Governors of the Federal Reserve System in Washington DC, and before that was a bank examiner for the US OCC. Bill began his career as a credit officer of a New York City-based bank. He currently serves on various boards of directors and advisory boards, providing strategic and regulatory advice, including China Construction Bank, Baton Systems, Suade Labs, Reference Point, IFRS Foundation’s Advisory Council, Toronto Leadership Centre and the Bretton Woods Committee. Bill received his MBA from Fordham University and BSc from Manhattan College.

Diane R. Maurice is a risk management executive and digital currency expert engaged in implementing strategy and policy central bank digital currency, regulatory sandbox platforms and other blockchain technologies. She worked for two years on various digital transformation projects with six central banks. Diane previously worked in risk and asset management roles at Fortis, ABN AMRO, Moody’s Investor Services, State Street Global Advisors, Morgan Stanley and TD Securities, as well as at the Federal Reserve Bank of New York, the Federal Reserve Bank of San Francisco and the US Treasury. She has a BA in history from Salem State College, an MPA in finance from Arizona State University and a MSc from the London School of Economics, where she completed work for a doctorate in financial services regulation, and has ISACA Certificates on Controls (COBIT) and Privacy (CDPSE).