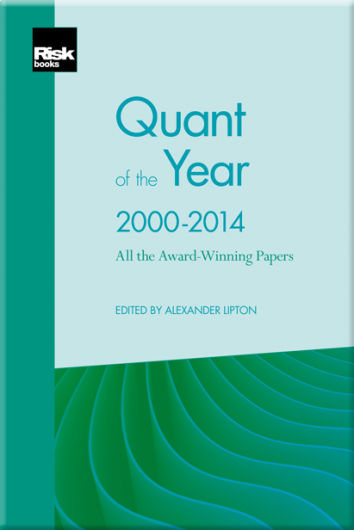 Quant of the Year

Quant of the Year 2000-2014 will empower readers to become familiar with the most important ideas regarding financial engineering presented since the year 2000, including the theoretical and practical answers to the problems posed by the financial crisis and its aftermath. Readers will learn how the best quants think and operate, what the most significant problems of the general field of financial engineering have been, and how to deal with the most important problems the quant community is now facing.

Alex Lipton, a towering expert in the field of quantitative modelling in finance, and the first recipient of the Quant of the Year Award from Risk Magazine, has assembled this collection of the seminal papers which won their respective authors the prestigious award which is now in its fifteenth year.

Quant of the Year 2000-2014 is a must-read for both aspiring quants and established practitioners. The new generation of quants will discover what the masters did in previous years and learn from their experience, while experienced quants will get a record of the key developments in the field more or less since the very beginning.

By their very nature the papers collected in Quant of the Year 2000-2014 cover the most important and relevant topics of financial engineering. Their chronological sequence gives a unique perspective on the development of the field, which cannot be obtained in any other way.

Alexander Lipton is a Managing Director, Quantitative Solutions Executive at Bank of America, and a Visiting Professor of Quantitative Finance at the University of Oxford. Prior to his current role, he was a Managing Director and Co-Head of the Global Quantitative Group at Bank of America Merrill Lynch and a Visiting Professor of Mathematics at Imperial College London. Previous to this he was a Managing Director and Head of Capital Structure Quantitative Research at Citadel Investment Group in Chicago; he has also worked for Credit Suisse, Deutsche Bank and Bankers Trust. Before switching to finance, Alex was a Full Professor of Mathematics at the University of Illinois and a Consultant at Los Alamos National Laboratory. He received his undergraduate and graduate degrees in pure mathematics from Moscow State University. His current interests include industrial strength derivative pricing including regulatory and economic capital calculations and valuation adjustments, as well as large-scale holistic bank balance sheet optimization. In 2000 Alex was awarded the first Quant of the Year Award by Risk Magazine. Alex is the author of two books (Magnetohydrodynamics and Spectral Theory and Mathematical Methods for Foreign Exchange) and the editor of four more, including, most recently, The Oxford Handbook of Credit Derivatives (jointly with Andrew Rennie). He has published more than a hundred papers on hydrodynamics, magnetohydrodynamics, astrophysics, chemical physics, and financial engineering. Alex is a founding patron of The 14-10 Club at the Royal Institution (jointly with David Harding). Alex is an avid collector of military optics and is currently working on a book on the history of military binoculars.

Chapter 9: Being Particular about Calibration
(Pierre Henry-Labordère and Julien Guyon)