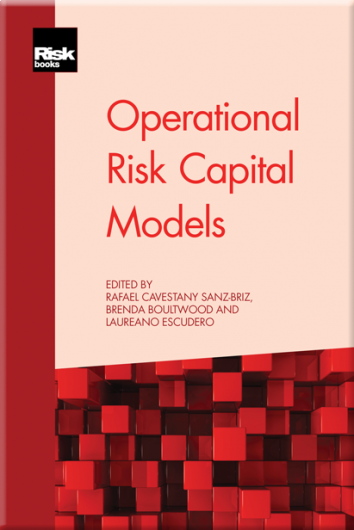 Operational Risk Capital Models is a guide for the implementation of state of the art operational risk capital models suitable for regulatory approval.

For insurers, Solvency II implementation has created the need, in both highly developed and less developed markets, for the development of these models that help to better understand risks, safe capital and compliance. For the banking industry, regulators in many countries in Africa, Asia and Latin America (as well as Europe) are pressing their local banks to implement advanced operational risk capital models. Banks that have made early implementation are looking to improve their capital models with new advances to match the increasing regulatory requirements.

"I found the quantitative methods presented in “Operational Risk Capital Models” to be not only rigorous, but also understandable and actually useable and useful, which can be said of shockingly few books treating operational risk. Amidst a wasteland of operational risk management pie charts and unactionable and subjective heat maps, books like this are an oasis of practical, applied solutions for capital estimation and stress testing. If your objective is to directly and measurably mitigate and manage operational risk using scientifically defensible, objective methodology, as opposed to red-amber-green traffic ‘analyses,’ the methods herein are the kind you need."

Operational Risk Capital Models enables you to model your operational risk capital to ensure the model meets regulatory standards. It describes the process end to end, from the capture of the required data to the modelling and VaR calculation, as well as the integration of capital results into your institution’s daily risk management.

The first part of the book describes a robust framework for the definition and capture of the four data elements: Internal Loss Data, External Data, Scenario Analysis and Business Environment Internal Control Factors. This part includes topics such as the validation of scenario analysis and the use of business environment and internal control factors as inputs to the capital model. It provides insights for mitigating cognitive biases in scenario analysis and defines a common understanding for operational loss. It also presents state-of-the-art methods for expert judgment elicitation (Structured Expert Judgment) and their application into operational risk scenario analysis.

The second part presents the exhaustive modelling and integration of the four data elements to compute operational risk VaR, capital and depict the operational risk profile of the institution. This part addresses all standard and more advanced topics, such as the modelling of BEICFs and their use in capital allocation, correlation calculation and ex-post capital adjustment; modelling of scenario analysis including GoF, tail control and more; determination of the optimal modelling granularity and threshold (up to 8 different methods); fitting distributions with old and new loss data by the use of a decay factor; analysis of capital instability (the resampling and what-if methods); various methods for external data re-scaling; construction of a hybrid model using credibility theory; operational risk dependencies including frequency-severity dependence and the use of expert judgment in their elicitation; different methods for capital allocation (contribution to expected shortfall, Heuler allocation, incremental analysis and others); backtesting of severities, frequencies and total losses; stress testing under different approaches including the modified LDA, regression, historical analysis, scenario analysis based and more.

Rafael Cavestany has over fifteen years of experience in the financial services industry covering the banking and insurance sectors.  He currently works as a director in True North Partners Group and SKITES. Before, Rafael worked at Everis as Executive Director of the risk management practice and PwC as Senior Manager. He has worked on projects for a number of leading financial institutions in USA, Canada, UK, Spain, Italy, LatAm and South Africa and his experience is focused on consulting projects for the development of risk management tools and the corresponding methodologies, workflows and data requirements, etc. with special emphasis on operational risk modelling. Rafael Cavestany received the MBA degree from University of Michigan in 1997, a degree in Economics from Universidad Autónoma de Madrid and is currently finishing his PhD thesis in Statistics.

Brenda Boultwood is the Senior VP of Industry Solutions at MetricStream. Previously, Brenda served as Senior Vice President and Chief Risk Officer at Constellation Energy. Prior to that, she served as Global Head of Strategy, Alternative Investment Services, at J.P. Morgan Chase & Company. At Bank One Corporation, she served as Head, Corporate Market Risk Management and Counterparty Credit, and Head of Corporate Operational Risk Management, before advancing to Head, Global Risk Management for the company’s Global Treasury Services group.

Brenda has also worked with PricewaterhouseCoopers and Chemical Bank Corporation. In addition, she has spent time teaching at the University of Maryland’s MBA program. Brenda was a member of the CFTC Technology Advisory Committee, and has also served on the Board of the Global Association of Risk Professionals (GARP).  She currently serves on the Board of the Committee of Chief Risk Officers (CCRO). Brenda graduated with honors from the University of South Carolina with a Bachelor’s degree in International Relations. She also earned a Ph.D. in Economics from the City University of New York.

Professor Laureano F. Escudero received the PhD. Degree in Economics from the Universidad de Deusto, Bilbao, Spain, in 1974 and a degree in Computer Science from Universidad Politecnica de Madrid, Spain, 1972. He has been Professor of Statistics and Operations Research at the Universidad Rey Juan Carlos, Spain, 2007-2013. In the period 2003-04 he was the President of EURO (Association of European Operational Research Societies).  He has worked at IBM Research, Scientific and Development Centers in Madrid (Spain), Palo Alto (California), Sindelfingen (Germany) and Yorktown Heights (NY), 1972-1991. He taught Mathematical Programming at the Mathematical Sciences School, Universidad Complutense de Madrid, Spain, 1992-2000 and Stochastic Programming at the Universidad Miguel Hernandez, Spain, 2000-2007. He is the author of 5 books, has co-edited 5 others, and has published over 135 scientific papers in leading journals and over 30 chapters in edited books. He has worked in different mathematical programming fields (linear, integer, nonlinear, stochastic) and its risk management applications to finance, energy, supply chain management and air traffic, among other sectors.

PART I - Capture and Determination of the Four Data Elements

7. Derivation of the Joint Distribution and Capitalisation of Operational Risk
Rafael Cavestany

9. Evolving from a Plain Vanilla to a State of the Art Model
Rafael Cavestany

11. Risk/reward Evaluation of the Mitigation and Control Effectiveness
Rafael Cavestany and Javier Moguerza