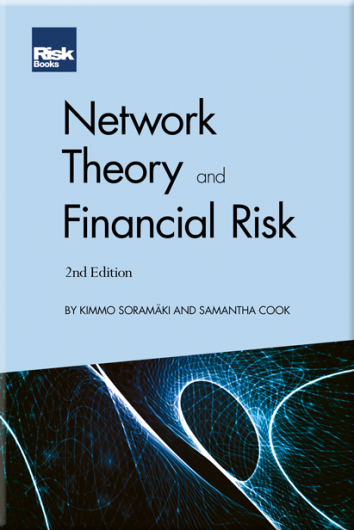 By Samantha Cook and Kimmo Soramäki

With new innovations in the field, this new edition of Network Theory and Financial Risk has been fully updated and expanded. A hands-on guide to analysing and modelling financial networks, authors Kimmo Soramäki and Samantha Cook provide an in-depth introduction to network theory and examine the general tools for network analysis.

With new innovations in the field, this new edition of Network Theory and Financial Risk has been fully updated and expanded. A hands-on guide to analysing and modelling financial networks, authors Kimmo Soramäki and Samantha Cook provide an in-depth introduction to network theory and examine the general tools for network analysis.

Soramäki and Cook show how network theory can be put to use to deal with real financial problems. Hedge fund and asset managers will find correlation networks useful for monitoring market dynamics and managing their portfolios. Regulators and supervisors can use payment networks and simulations to understand the effects of liquidity-saving mechanisms and to see how different centrality measures relate to a bank’s performance in the event of an operational failure. Insurance providers and supply-chain economists can use trade networks to understand how network theory can be used to identify weaknesses in the system.

Readers will understand that networks underlie all financial risk, and will be able to use this knowledge to better analyse and assess all types of financial risk, including liquidity, operational, insurance, and credit risk.

Samantha Cook is the chief scientist at FNA, where she works on the design, testing and implementation of models and algorithms. In addition to network theory and finance, her research interests include Bayesian modelling and statistical computation, and she has published on statistics, economics, finance, psychology and public health. Prior to joining FNA, Samantha worked in the research group at Google, and has taught statistics at several universities, including Columbia University in New York and Pompeu Fabra University in Barcelona. She earned a PhD in statistics from Harvard University in 2004.

Kimmo Soramäki is the founder and CEO of FNA. He started his career as an economist at the Bank of Finland, where in 1997 he developed the first simulation model for interbank payment systems. In 2004, while at the research department of the Federal Reserve Bank of New York, Kimmo was among the first to apply methods from network theory to improve our understanding of financial systems. During the financial crisis of 2007–08, he advised several central banks, including the Bank of England and European Central Bank, on modelling interconnections and systemic risk. This work led Kimmo to found FNA in 2013 to solve important issues around financial risk, and for exploring the complex financial networks that play a continually larger role in the world around us. He holds a DSc in operations research and an MSc in economics (finance), both from Aalto University in Helsinki.