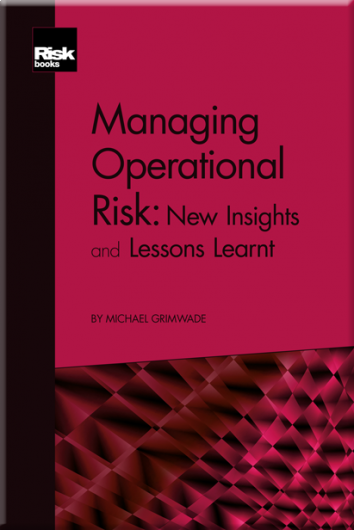 Managing Operational Risk: New Insights and Lessons Learnt addresses the root causes of the unprecedented operational risk losses suffered after the financial crisis; the new and emerging operational risk threats; and the lessons to be learnt for those working within the sphere of operational risk. Through the use of case studies and analysis of industry trends, Michael Grimwade examines how we can make operational risk management more effective.

Managing Operational Risk: New Insights and Lessons Learnt examines the ways in which market and credit risks were transformed into operational risk losses, and how the current actions of both central banks and regulators may be unwittingly sowing the seeds for a new wave of losses.

The book is structured around the following three questions:

Michael Grimwade has worked in operational risk management for 20 years. He is currently Head of Operational Risk for MUFG’s International Securities Businesses.

Michael won a scholarship to Oxford to read zoology, and following graduation trained as a chartered accountant, before moving into consultancy, initially working on process improvement projects. Overlaps between the drivers of process inefficiency and operational risk led him to undertake his first operational risk management project in the mid-1990s, when working for what is now PwC Consulting. By the start of the new millennium, however, his disenchantment with the apparent lack of demonstrable commercial value provided by operational risk management prompted a brief return to cost reduction and process improvement.

Following the finalisation of Basel II in 2004, Michael moved back to operational risk management, initially as Operational Risk Director for Lloyds TSB's Wholesale & International Division, and subsequently as Head of Operational Risk & Compliance for the ~300 RBS and NatWest branches that are currently being spun-off as Williams & Glyn.

Operational risk management continues to evolve as a profession, and Michael has recently focused on sharing good practice via industry seminars, conferences and as a contributor to the Institute of Operational Risk’s ‘Sound Practices Guides’. In 2014, Michael’s efforts were recognised by the Institute, when he received an award for his 'Contribution to the Discipline of Operational Risk Management', primarily for his work on techniques for conducting and validating scenario analysis. In 2015 he was elected to the Board of the Institute, as Director with Portfolio for Regulatory & Industry Bodies.

Part I: What were the Root Causes of the Unprecedented Spike in Operational Risk Losses after the Global Financial Crisis?

Part II: What are the New and Emerging Operational Risk Threats?

Introduction to Part II: What are the new and emerging Operational Risk threats?

9. Backtesting to the Mid-1990s and Conclusions

Part III: What Lessons can the Profession Learn?

Introduction to Part III: What Lessons can the Profession Learn?

14. Solutions for a Triumvirate of Seemingly Intractable Problems

Appendix 1: The Chronology of the LIBOR Scandal

Appendix 2: Some Examples of Common Scenarios