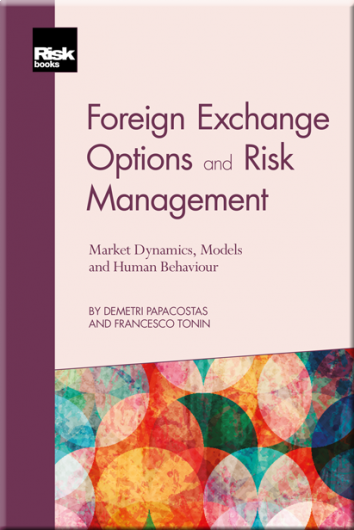 An Introduction to Behavioural Risk

By Demetri Papacostas and Francesco Tonin

The foreign exchange (FX) markets are experiencing a time of great change brought about by unprecedented levels of transparency and efficiency in the aftermath of the Global Financial Crisis of the 2000s.

Industry experts Demetri Papacostas and Francesco Tonin use their extensive experience and knowledge to examine the behaviour of the FX markets' major players during this critical period.

Fintech and the global coordination of regulation is allowing, for the first time, a look under the hood. The FX market will look increasingly like the equity market, and the rocky path to the promised land of frictionless, fully transparent FX markets will be closer than ever.

The foreign exchange (FX) markets are experiencing a time of great change brought about by unprecedented levels of transparency and efficiency in the aftermath of the Global Financial Crisis of the 2000s.

Industry experts Demetri Papacostas and Francesco Tonin use their extensive experience and knowledge to examine the behaviour of the FX markets' major players during this critical period.

Fintech and the global coordination of regulation is allowing, for the first time, a look under the hood. The FX market will look increasingly like the equity market, and the rocky path to the promised land of frictionless, fully transparent FX markets will be closer than ever.

Foreign Exchange Options and Risk Management examines the basic use of FX, and particularly FX options, by the major market participants, and assesses in a practical and intuitive way:

> How they mitigate risk

> Why they mitigate risk

> How they profit and how they speculate using FX-related instruments.

"This book provides a unique and intuitive perspective on the foundation of both the technical and human elements that govern FX markets. The authors have an engaging talent for feeding the reader just enough math to create "aha!" moments, without distracting from the insightfulness of their conclusions. They couple it with an extraordinary collection of anecdotes that illustrate how people scramble in the financial markets to find an edge in every possible way."
Philip Gellos
Gellos Capital LLC
@fxmacro

"Demetri Papacostas and Francesco Tonin, two leading experts in the world of currency options, have combined their talents to produce a rigorous yet highly readable guide to the new world of FX trading, currency options and risk management.

Technological advances and regulatory changes are rapidly changing the landscape of foreign exchange from the way bank trading desks operate to the way buy side risk managers have had to adapt in the new post-financial crisis environment.

This book guides the reader through these changes in a breezy fashion, almost in a way that a good novelist would take. What truly stands out in this book is the way that it describes in an easy-to-read, step-by-step manner, the world of currency options and risk management in an intuitive, yet rigorous manner. FX sales people, traders, risk managers, analysts and students of the foreign exchange market will want to own this book."
Michael R. Rosenberg
Bloomberg Intelligence Currency Strategist

"I have know Demetri Papacostas professionally for three decades. He has a solid grasp of the field and enough clinical knowledge to get the intricacies. If you ever want to talk about FX and FX options, looking for someone reliable, give him a call, or, better, read his book. This is way clearer and more solid than any material by finance academics."
Dist. Prof. Nassim Nicholas Taleb, New York University, Tandon School of Engineering
Renowned author of The Black Swan and most recent work Skin In The Game

"Demetri has worked with us on many initiatives over the years, from option pricing models to finessing our algorithmic trading strategies. Demetri's value is that he always brings a deep understanding of the currency market dynamics with a determination to understand any given challenge from the customer point of view, working with us on many successful outcomes. Demetri and Francesco have now delivered a balanced and comprehensive volume that excels on many levels; the book is a very engaging narrative on the history of currency markets, with great anecdotal color, but it also does not shy away from getting into some deeper technical areas of global currency flow dynamics and option math. As such it is a rarity.... an absorbing read that will also serve as a handy reference book on the many facets of modern currency trading.

The book should be on the summer reading list of anyone with an interest in currency markets. Certainly a must read for anyone in corporate treasury function managing international exposures."
Mark Hobbert, CFA Vice President & Assistant Treasurer, IBM

"Written by two highly respected professionals and esteemed colleagues, this book will guide you through the intricacy and beauty of FX markets and their trading activities. The book structure and content are unique. Intuitive explanations, supplemented by enlightening numerical examples, make it an educational yet very enjoyable read. Thank you Demetri and Francesco for sharing your invaluable banking front office experience with all of us!"
Dr Fabio Mercurio, Global Head of Quantitative Analytics, Bloomberg LP

Demetri Papacostas is head of the Market Specialist Group at Bloomberg. His FX career spans 35 years, with extensive experience developing and running profitable FX and derivative businesses for major financial institutions. His FX derivative product specialisation includes trading, structuring and selling to corporations, hedge funds and asset managers, as well as to the private wealth arms of money centre banks. Prior to Bloomberg, Demetri was a managing director at JPMorgan, where he ran the commercial bank FX sales team in New York and FX derivatives sales nationally, and he previously also managed its currency derivative structuring team. He also established a global FX derivative sales presence for ABN AMRO, and previously managed currency and precious metal options business for Royal Bank of Canada, Security Pacific (Bank of America), UBS and Marine Midland Bank. Demetri is a well-known speaker at financial forums and webinars, has been quoted in the Wall Street Journal, Profit & Loss magazine and Bloomberg Business Summit 2014, CFO Edition, and has been published in Bloomberg’s Markets and appeared on Bloomberg TV to discuss the FX markets. He received a BA in economics and computer science from New York University, and an MBA from Pace University, with numerous honours and distinctions for academic achievement. Francesco Tonin is an FX market specialist at Bloomberg, based in New York. Most recently, he was the North America head of FX structuring at Citigroup, having been recruited initially at Morgan Stanley for a sales position in interest rates derivatives. Francesco then worked at Deutsche Bank in FX corporate sales, and subsequently in FX exotic derivatives trading, and at Credit Suisse held an FX structuring role. He has presented together with corporate speakers such as General Motors, Fluor Corporation, Dell Computers, Knowles Corporation, including to the national Association for Financial Professional conference, Texpo, Windy City, Minnesota AFP, New York Cash Exchange, the IMF, Princeton University and Columbia University. Francesco has written a couple of hundred articles on financial matters, with contributions to Bloomberg Markets magazine and Bloomberg Briefs. His mathematical research activity focused on the Cauchy problem for partial differential equations with holomorphic coefficients, for which he received research grants from the EU, the French Ministère des Affaires Etrangères, the University of Padova and the University of Pisa, in addition to the Italian National Research Council and a Fulbright Scholarship offer. Francesco holds a BS in mathematics from the University of Padova, a PhD in mathematics from the University of Torino and an MBA from Columbia University, and has also held a tenured research position at the University of Padova.

PART I: THE FX MARKETS, THE GENESIS OF A NEW WORLD ORDER

1 A Brief History of the FX Market's Evolution

PART II: THE MARKET & TRADING FLOOR DYNAMIC & THE FORMULAS THAT DRIVE IT

8 Getting to the Formula and the Correct Probability Distribution

9 The Greeks: A Practical Approach

14 Situations Gone Mad, From the Most Complex to the Simplest

15 Speculators and Hedge Funds: How Do Portfolio Managers Make Money?

16 Speculating and Hedging: The Fundamental Differences

14 Situations Gone Mad, From the Most Complex to the Simplest

15 Speculators and Hedge Funds: How Do Portfolio Managers Make Money?

16 Speculating and Hedging: The Fundamental Differences