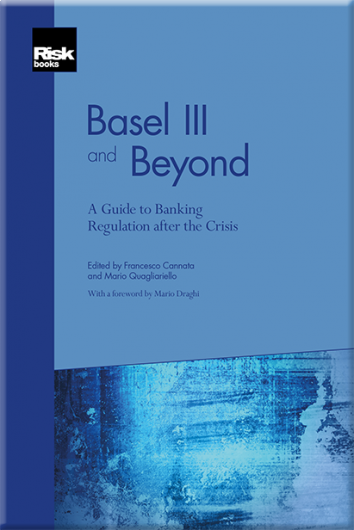 Basel III and Beyond

By Francesco Cannata and Mario Quagliariello

Around the world, central bankers, regulators and governments have responded to the financial crisis with new regulation and legislation. The cornerstone of this global initiative to contain risk is Basel III – sweeping new regulatory standards for banks on capital adequacy and liquidity.

These new standards will define markets and their practices for decades to come. Already, they are reshaping institutions, business models and balance sheets.

Understanding Basel III and the thinking behind it is essential for market participants and for those charged with implementing the standards. In Basel III and Beyond, the first book-length treatment of Basel III, editors Mario Quagliariello of the European Banking Authority and Francesco Cannata of the Bank of Italy have assembled contributors from regulators and central banks involved in preparing the standards including a foreword from Mario Draghi, President of the European Central Bank.

Drawing on expert contributions from those deeply and directly involved in the creation of the new global standards, Basel III and Beyond is a must-read for market practitioners and regulators who need to understand the emerging framework of financial regulation, its implications and impact.

After three of the most tumultuous years in financial markets in living memory, the regulatory die was cast in December 2010.

Issued by the Basel Committee on Banking Supervision, the Basel III standards on capital and liquidity, along with measures from July 2009 on trading book and structured finance, are the centrepiece of the regulatory community’s response to the crisis. Slated for implementation from January 2013, Basel III must be fully phased in by January 2019.

“This book provides the reader with a comprehensive discussion of the contents of the regulatory reform, taking advantage of the knowledge of experts who contributed to shaping the new rules”.

With a foreword from Mario Draghi, president of the European Central Bank and written by experts deeply involved in these reforms, Basel III and Beyond provides a practical and global perspective on the new standards. The book combines technical rigour with an accessible style to provide the essential primer to the new regulatory blueprint and the rationale behind it.

The book is divided into four sections:

The first section focuses on the market practices that contributed to the financial turmoil and the subsequent policy response from the G20 and the Financial Stability Board that led to the proposals of the Basel Committee.

The second analyses the new definition of regulatory capital, the new framework for the trading book, changes to counterparty credit risk capital rules, and the new measures for mitigating procyclicality.

The final section surveys the changed regulatory landscape, looking at crisis management and resolution, the impact of the new regulations, and the future architecture of financial supervision and regulation.

The book speaks to the technical aspects and disciplines of modern markets and provides summaries of the most important elements, the thinking behind them, how they will be implemented and the potential repercussions.

Basel III and Beyond is an essential resource for market participants, researchers, regulators, academics, law makers and governments worldwide.

Francesco is the head of the Regulatory Impact Assessment Unit in the Regulation and Supervisory Policies Department of Banca d’Italia, the Italian central bank. He has been the representative of Banca d’Italia in a number of international working groups dealing with Basel II issues (IRB, Pillar 2, LGD, double default), supervisory cooperation (colleges of supervisors) and impact studies at the ECB, CEBS and the Basel Committee for Banking Supervision. More recently, at the Basel Committee and CEBS he has been closely involved the quantitative impact studies conducted on the Basel III reform. He is also following the monitoring activity that international regulators conduct on a regular basis on bank’s minimum requirements. His interests concern mainly the regulation on banks’ capital adequacy, economics of financial regulation, risk management. He has published several articles in Italian and international journals, including the Journal of Financial Services Research, the Journal of Banking Regulation and Risk. He is also the editor of a comprehensive book on internal ratings (The IRB method, Bancaria Editrice). He holds a M.Sc. in finance from the Cass Business School (United Kingdom) and a Ph.D. in banking and finance from III University of Rome (Italy).

Mario is currently Head of Unit - Risk Analysis at the European Banking Authority. He previously served as a senior economist in the Regulation and Supervisory Policies Department of Banca d’Italia, the Italian central bank. He has been the representative of Banca d’Italia in a number of international working groups dealing with financial stability issues at the ECB, CEBS, IMF and the Basel Committee for Banking Supervision. His interests concern macroprudential analysis and stress tests, banks’ capital regulation, procyclicality, the economics of financial regulation. At the Basel Committee and the European Commission, he is involved in the work on countercyclical capital buffer. Mario has published several articles in Italian and international journals, including the Journal of Banking and Finance, the Journal of Financial Services Research, the Journal of International Financial Markets, Institutions and Money, Applied Economics, Applied Financial Economics and Risk and edited the volume Stress Testing the Banking System: Methodologies and Applications, published by Cambridge University Press. He holds a Ph.D. in economics from the University of York (United Kingdom)

(Mario Draghi, Governor of the Bank of Italy)

Part I – Basel in the Shadow of the Crisis

2. The Policy Response: from the G20 requests to the FSB roadmap. Working towards the proposals of the Basel Committee

3. The New Definition of Regulatory Capital

4. A New Framework for The Trading Book

(Akhtarur Siddique, Office of the Comptroller of the Currency)

6. Tools for Mitigating the Procyclicality of Financial Regulation

8. The New Framework for Liquidity Risk

9. The Discipline of Credit Rating Agencies

13. The Impact of the new Regulatory Framework

14. A Brazilian Perspective on the Revised Basel Framework

15. A New Institutional Framework for Financial Regulation and Supervision